It took almost a month for the national news to report seriously the breach which includes 55 million adult Filipino voters around the world.

I was paranoid (and still somehow) when I learned that a website created a search engine which posted our voter’s registration information. I did the unadvisable: searched my name. People are telling me not to share the link and search my name. But I did. And I found my data! Full name, birthdate, home address, registration date, voter’s identification number, and probably my fingerprints. For some new voters, it might have their passport numbers.

As a voter since 2007, it took me years to realize how incompetent and insensitive our government’s election arm is. I thought it was only an isolated case in ARMM last 2013 when one of my fellow novices had his voting sheet shaded by a watcher and the soldiers guarding the precint outside the school just let the incident unapprehended. This is one of the most serious blunder that the COMELEC allowed.

Even the hacking happened last March 27, the COMELEC (Commission on Election) is still in denial for three weeks even as far as saying that the data hacked are not that serious. Hello? Do they even realize that they, the COMELEC officials, themselves are at the risk of having their identities stolen. Even President Aquino’s data is there in the open (I know this because I searched for his name). When our government is not doing it’s job to protect it’s citizens, at least in the cyberworld, what can an ordinary citizen like me do? 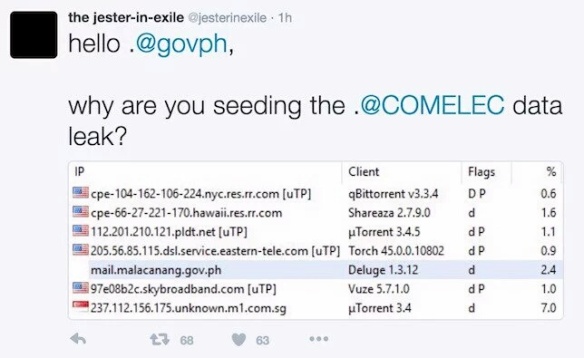 When our government is seeding our data, what can we do?

These are some possible scenarios (at least for myself): With a cyber thief who have stolen my identity, our hone might receive stuffs like Shakey’s pizzas, Jollibee meal, or gadgets named after me which I never ordered and my family is asked to pay for it.

For the unlucky ones who had their passport numbers included in the registration, identity theft is a more serious threat.

The only defensive measure I did so far was to report to CloudFare and GoDaddy the search engine who leaked the files for the “lulz”.

This is one of the few times I would be ranting here in this blog.

And for the love of my country, I would use this frustration towards the COMELEC as my motivation to educate students to admit their faults, take responsibility, and understand what power and service to others means.